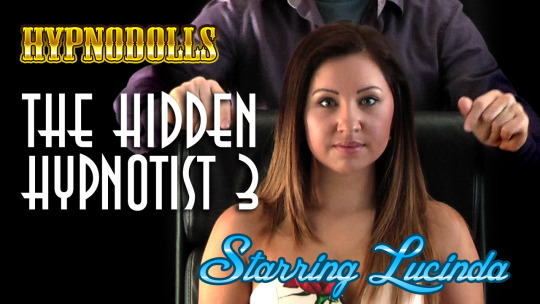 Luci returns for her second fantasy shoot, and this time I mix in a little real hypnosis!

Luci is chatting on the phone to a friend about the sessions she’s been undergoing to help her stop biting her nails. As far as she’s aware, one session was all it took to kick the habit. Her friend knows otherwise though, Luci’s had a number of follow-up sessions that she has no idea of! As she’s querying this, there comes a knock at her door.

It’s Mr Lucas, her “trusted” therapist. She’s briefly baffled at his presence, but as soon as he waves his hand past her face, all thoughts and cares vanish. “I’m not here, you don’t see me.” he speaks, and she echoes him obediently as her training as his mind-controlled puppet takes control.

The Hidden Hypnotist then begins to manipulate her behaviour, having her undress, pose, twerk, (You can thank labattviking over on the MCForum for that) wear latex sexdoll lips! (another audience request :P) display herself on his podium and play in her bedroom and shower whilst he enjoys the view!

The “extras” edition contains an impromptu genuine hypnosis session. I’d tried (and failed) to hypnotize Luci previously in her “iDroid Test Subject” video, hence only planning for a fantasy shoot this time round. I’d been taking WiseGuy’s rather wonderful training course though, so felt more confident about working with a tricky subject. I had a good amount of success, so there’s some nice moments where Luci finds herself wanting to be stripped, gagged and slave trained… as I hadn’t actually *planned* to make it a genuine shoot, we stuck to the fantasy plan I’d prepared, but I’m including this bit anyway as an added extra.

Comes in two flavours:
Movie & Extras Edition: 82 Minutes / $19.99
This version contains the movie itself, an extra long twerking scene, and the impromptu (genuine) hypnosis session that I carried out.

Movie Only Edition: 32 Minutes / $18.99
This version contains the movie only.